Enabling interoperable cross-border ticketing in public transport is a challenge for most regions within Europe. However, in the border region of Aachen first steps into the direction of seamless travelling have been made. In the border region between Germany, Belgium and the Netherlands not only three different countries with three different languages meet, but in public transport also three ticketing systems have to be brought together. All of them are based on different technical standards. While the German eTicket Deutschland is based on the VDV-KA standard, the Dutch OV-Chipkaart is based on the Mifare standard and last but not least the Belgian MobibCard follows the Calypso standard.

The transport authority Aachener Verkehrsverbund (AVV) works continuously on removing barriers for cross-border public transport. Tariff structures, bus and train services as well as passenger information systems have improved significantly during the last years. However, in times of digitisation the field of ticketing has led to new challenges. Due to the isolated and independent development of national ticketing standards, a smart solution is required in order to establish interoperability in cross-border public transport ticketing. Key to success is to not change the existing national standards, but to add an extra interoperability layer, which is also applicable to other border regions in Europe.

AVV was part of the European Horizon2020 Research & Development project “European Travellers Cub” (ETC), which dealt with interoperable ticketing. Within the ETC project partners from the Netherlands, Luxemburg and Germany developed an interoperable ID-ticketing system, which enables a router-based communication between different national system set-ups on each side of the border. The ETC interoperability network enabled the passenger to use one single chipcard for traveling in the Netherlands and Germany without a separate registration in the other country. The technical approach is based on an ID that is accepted in both countries and is added to the currently used chip cards. The tariff is calculated in the respective national system, but the payment is only made to the passenger’s home PTO, which provides the account. Hereby the system follows the principle of roaming when traveling in the neighbour country or across the border.

The first pilot in context of the ETC project proved the technical system set-up of the interoperability network to be successful. In 2020 a follow-up project started, focussing on the use of smartphones as the central user medium. The smartphone-based system has the advantage that it is also open to users without a chip card and the system is not dependent on infrastructure such as validators. The new project called easyConnect focusses on the implementation of the planned ID-based check-in/be-out system in North-Rhine Westphalia and is conducted in close collaboration with partners in the Netherlands. On the Dutch side, the system is part of the national MaaS programme that focusses on multimodal traveling across borders. The system will bring additional value to the passengers and will be connected to the most recent developments in both countries and will first be tested on the cross-border train corridor between Aachen and Maastricht Train in 2021 and in a second step on the corridor between Cologne and Maastricht in 2022

The vision is to enable the passenger to perform a check-in in Cologne and a check-out in Maastricht and take all complexity away from him. The backend will automatically transfer the transactions to the respective national ticketing systems and finally the passenger will receive an invoice for his journey. In this context the ID-based approach adds flexibility to the ticketing system. The user is identified by a unique ID that can be recognized by a variety of services, which do not have to be limited to public transport. 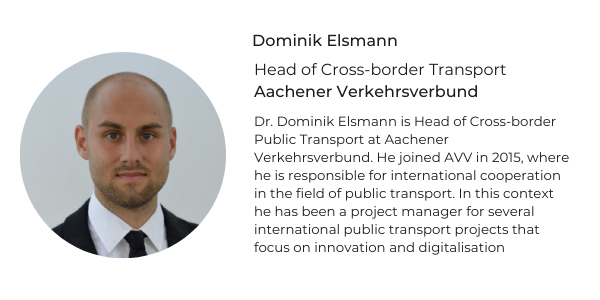