“I was reading an article about passenger transport last week. Quite interesting, actually, about how far we’d come in twenty years.”

“Really?  I can’t even remember that far back…”

“Come off it – it’s not THAT long ago.  I did have a bit of a laugh. Do you know, people used to drive their own cars to train stations, pay to park all day long, and then go to a huge machine and exchange their currency for a little bit of card that someone else would then want to keep looking at on their journey?  Hard to believe now, but contactless payment for your travel wasn’t universal then….”

“Surely that was in the olden days?”

“Nope– 2021… seriously. Back then, people still hadn’t twigged the benefits it would bring – obvious now, but then, they hadn’t realised what you could do with

data, and how you could combine travel data and payment data to help customers, and to plan how transport works as a whole.”

“Surely, that meant everything worked in siloes, almost in a vacuum?  Not exactly great for people wanting to travel.  Why didn’t they do something about it?”

“Well, there were a few reasons, apparently…. Contactless payment across entire transport networks was possible, but because the whole industry was so fragmented, it was only taken up sporadically.  So, all that information on movement where people were needing to go from and to was either not captured, or used in a really limited way.  And so neither the customers nor the transport industry could get the benefit of all that data being used for mutual benefit…”

“Oh yes, data… that used to be a problem didn’t it? People used to get their knickers in a twist about privacy and ‘Big Brother’….. And then go and moan about it on their Facebook page!”

“It was kind of the way things were. The big change came when passengers started being treated as customers, and put at the centre of all the thinking.  As customers, they were used to transparency and simplicity in all sorts of retail experiences… you know, quickly find the item you need, swipe to buy it and have it delivered quickly and with the minimum fuss – all from your phone, and completely confident you have paid the best price available.  Just like data and its use, it’s all to do with earning customer trust.  It seemed that idea took a long time to catch on properly..”

“You mean they had to do all the running about and were still stuck with a fixed price and figuring out the best mode for themselves?  What a pain!”

“Sure did… what we take for granted now, with the your own travel account sorting out everything for you, was still being talked about – but without much in the way of action.  Much of the transport network was organised according to arcane old arrangements that were at best outdated and often, completely bonkers, with little regard for what customers wanted, needed, what they thought and what they expected.  For many people, the idea of paying seamlessly, once, for all elements of your journey and knowing all your preferences were already taken into account, was just that – an idea.  And being kept informed was quite a rarity too.  Yes, of course, people could check apps and Twitter and be sent notifications if things were messed up.  But it was all reactive – there was none of the proactive, predictive intelligence that we are used to these days, now that data is being seamlessly integrated into planning and operations to help everyone who runs and uses transport of all kinds.”

“I didn’t think all that stuff was that recent – I thought the idea of holistic transport provision had been around a long time…?”

“Yes, the idea had - and lots of people were talking about it and the benefits they thought it would bring.  But it was only when a company like Worldline, as a payments provider, waded in to bring together the streams of movement, payment and location data that things began to really take off and we started to see the shape of how things COULD be…. What was different was that at last people were voluntarily giving up data knowing they could absolutely trust it would be used for their benefit – and to help society and ultimately social mobility.

Worldline (and others, to be fair) showed just what could be done to make entire transport eco-systems work better through some simple but admittedly visionary measures…. Pull together contactless payment data and movement data and provide a single, easy to use subscription service to access it – it wasn’t magic but it was transformative.  Odd, when we’re so used to it now….”

“Do you know, as well as that article, I also read something that made me chuckle.  Apparently Worldline turned up at the Transport Ticketing show in 2021 – and refused to talk about tickets at all!” 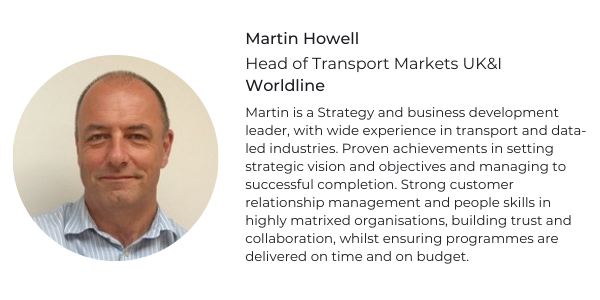